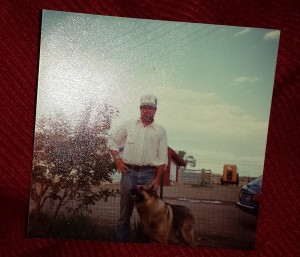 I had a harrowing event occur on my way home tonight and it led to an unexpected memory. I was running late, anxious to get home, and headed down the last mile of our dirt road. As I rounded the last bend, I saw two dogs in the road- one big, one little. Neither moved; and as I was going too fast (as usual), it took some effort to get slowed down.

Meanwhile the dogs weren't moving- at all.

Then I realize it is one big dog and one very little person, a toddler- leaning on his riding toy like an elderly person using a walker.

I stop, put on my hazard lights, while trying to shield the toddler from other idiots racing down the country road as fast as I had been. I notice that the closest house (at least 200 hundred yards away) had the front door wide open and assume that's how he made good his escape.

With my heart pounds in my ears, I threw the riding toy in the back of the car and pick up a (now) screaming toddler and place him, kicking and screaming, into my passenger seat; drove him down the driveway, and honked like a crazy person to draw out the home owners.

After a brief exchange with his confused and horrified parents, who thought he was safely inside the house all along, I completed my journey home at my new-found speed of molasses.

Later on in the evening, once my hands stop shaking, I realized that I was going to see that little boy's face in my head for a very long time. A real tragedy was averted and for that, I thank God and the giant angels he's assigned to me and my vehicles over the years.

But another image has seeped to the surface, surprisingly even stronger than the boy's face- the dog.

It was a beautiful German Shepherd and upon further reflection of the entire incident- he saved that boy's life.

I saw the big dog first and took extra effort to slow down because he wasn't moving. Dogs on our road move fast when cars come because we do all drive through there too fast. This dog stayed perfectly still, at his own peril, because he knew that little boy was in trouble; and he was on guard.

First hand, I know how protective German Shepherds can be. I had one watch over me in my own childhood- so they are my favorite dog- but I also have a healthy fear of one who's guarding his own. So I was slow getting out of the car and careful about approaching the boy. The dog did nothing threatening, but paced back and forth in about a 10 yards run keeping an eye on the situation.

That dog saved his life (and mine because I couldn't live with myself if I hurt someone like that).

I had my own German Shepherd guard dog as a kid, Ike. It was my Dad's dog, but he was my friend. Ike let me ride him, he pulled our sled, he even let me fall asleep on him in his straw dog house. Somehow that dog was able to express love and affection better than most humans. The other way I knew he loved me was how ferocious he became in protection of me when I was home alone, bordering on rabid if someone tried to come in the gate to our fenced front yard.

There's a reason soldiers and law enforcement put their lives in the hands of those dogs; and my neighbor's dog proved it again tonight. He stood his ground at his own peril- to guard that little boy.

In honor of my own childhood guard dog, I was only able to put my hands on one old and worn photo. You'll notice my Guard-Dad is also in the photo. In some future post maybe I'll described his ferocious and borderline rabid protection of me as well. 🙂

Thanks, Ike and all of the other dogs who are willing to lay down their lives to save ours.