Now that I'm writing again outside of work, I find my reading tastes are, once again, leaning more literary and less 'brain candy'.

Yesterday, I started a memoir by one of my favorite authors, Richard Russo. At three a.m. this morning I made myself put it down; and then devoured the rest when I woke up. The U.S. release of the book is titled Elsewhere.  Apparently there is a U.K. release titled On Helwig Street, apply named for the street where Russo was raised by his mother in the town with which he would carry on a love/hate relationship to this day. 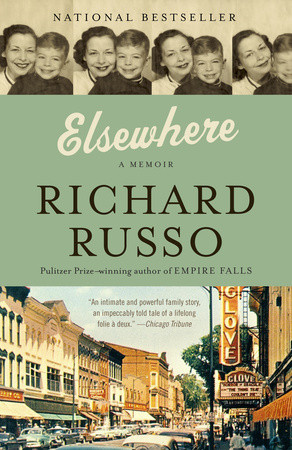 As with all of his books, I laughed, and cried, and stopped frequently to contemplate something he had to say. It was a great book. But, I did not enjoy reading it. It was painful. He is such a good author and storyteller; and his willingness to be honest with his reader made me feel like I was eavesdropping in on an intimate, revealing conversation. But it was a topic about which it was hard to listen.

To put it plainly, Russo was an only child raised by a mother with mental health issues. From his earliest memories, she enlisted him to copilot her crazy train, and he obliged for the full course of their lives together, despite significant consequences for himself and his family, particularly his wife, Barbara. Once Russo's mother had passed and he had some time to gain some perspective, her unconventional ways of thinking still haunted his view of himself and what he might have done differently.

It was hard to read, even while being impossible to put down.

Like watching a bad horror movie while screaming at the characters to stay away from the dark basement, I spent much of the book silently yelling advice at Russo to have some fucking boundaries with his mother-- to no avail. I, personally, have a low opinion of men whom I perceive as being a momma's boy. I could hardly tolerate the sitcom Everyone Loves Raymond because I constantly wanted to lash out at the Ray Romano character for being forever manipulated by his mother, played by the very talented and believable Doris Roberts. And for much of the memoir, I perceived Richard Russo allowing and enabling the same kind of selfish abuse from his mother.

However, in the last few chapters of the book, once the majority of the story was told, he seemed to shift to conclusions he could take away from decades of loving respect, exhausted frustration, haunted regret, relief, and grief. As he tried to understand for himself why he would carry on for so long in such an unhealthy relationship, I was reminded of the song lyric quoted above from Desperation by Eminem, on the Marshal Mathers LP2 album.

The song is about a couple who are desperately drawn and intertwined with one another to the point they can't stand one another:

We stuck to each others hips and we can't do anything individually
Which is to cling on, scared to be alone, can't, specifically to
describe it I just can't seem to give a reason this definitive,
just need you
Talkin bout "I live and breathe you"
And you pretend to be as mentally and physically addicted to me
As Wiz Khalifa is to reefer
Don't wanna be without you, don't wanna be with you neither, bitch
Put me in a situation in which it's both I wish to seek

The first time I heard the song, I started to laugh and said, "Been there." I've suffered from a lifelong misconception that there's no such thing as too much of a good thing. Sunshine, water, and heat are all needed to live; but each one is also known for its own equally destructive force. I still can't seem to get that through my head. Even sunshine burns if you ask too much.

So, as with Russo and his mom or Eminem with his girlfriend, humans seem to find themselves captivated with a powerful form of love that brings with it side-affects that can do as much harm as they do good. And it's not just relationships. In my own life, I'm trying to keep carbs to a minimum because the foods I love and crave want to kill me. That's shocking. Addicted to (or at least strongly drawn to) certain foods could kill me, just like a drug addict or alcoholic. Forget leaving Las Vegas, apparently Leaving Dunkin Donut isn't much better.

My husband has been very supportive as I try to fight my lifelong food issues that have taken a measure of health and happiness from me in the last few years. He told me recently that he had a hard time understanding how food could have such a compulsive hold on me until he began comparing my behaviors to his own in light of his own personal struggles and he found a lot of empathy for me when the parallels abounded.

Russo comes to a similar conclusion about the things in life that nourish us; since nothing is perfect, you are being nourished by both the positive and negative aspects. It would make sense that there would be some negative side affects even in the most positive example. But if that thing that is nourishing you is substantially broken or toxic, including if that thing is a relationship with a mother, partner, sibling, friend, hobby, substance, or job, you're going to find your own cells saturated with that same brokenness or toxicity.

But that's thing about desperation, if you're dying of thirst and your choice is death from dehydration, or toxic water that might hurt you in the long run, most of us choose to drink. Richard Russo  brought that human tendency to light in this exceptionally honest and beautifully written memoir.

Now It's Your Turn

Do you have your own story of love, desperation, addiction, or things your parents did that fundamentally shaped your life- for better and for worse?

Use the comments section to tell your story.